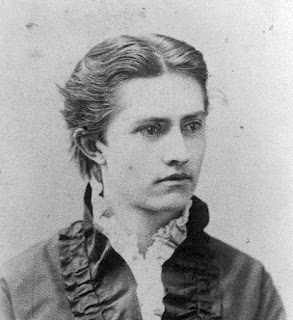 Some of you are shy about commenting on the blog but I am enjoying your emails and questions.  On Thursday I actually got a letter!  Barb S. wanted to share the story of women voting in her hometown of Lombard, Illinois!

Lombard, is a suburb outside of Chicago, Illinois and in 1891, Ellen Martin entered the general store where voting was held and demanded that she be allowed to vote.  She became the first woman to vote in Illinois. 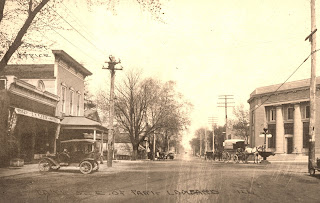 Ellen Martin was born in New York in 1847, attended college in New York and graduated with a law degree from the University of Michigan in 1875;  a year later she was admitted to the bar in Illinois.  She along with Mary F. Perry had a small law firm in Chicago.  The women commuted from Lombard where they rented rooms to work in the city.

Many sources have pointed out the main challenge that women lawyers faced.  Because they did not have full rights to citizenship and could not vote, they could practice some law but were never really recognized as true lawyers.

On April 6, 1891, Ellen marched into the general store and demanded to vote.  According to one newspaper:

Ellen was prepared for the confrontation: 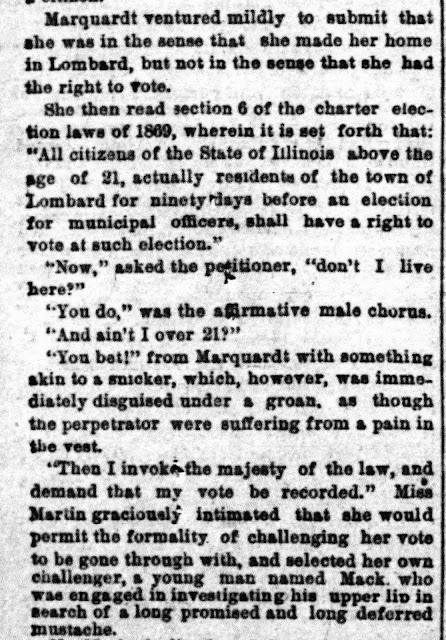 The last sentence of the description below might be my favorite: 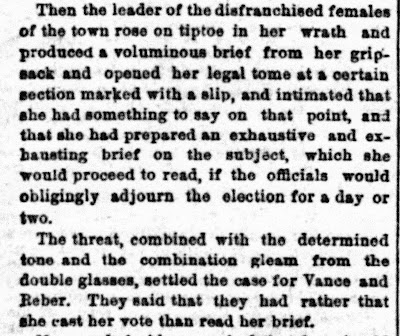 After Ellen had voted, she told 14 women from the town she had done so and they too went to cast their ballot.

The women made headlines not only in Illinois but throughout the midwest: 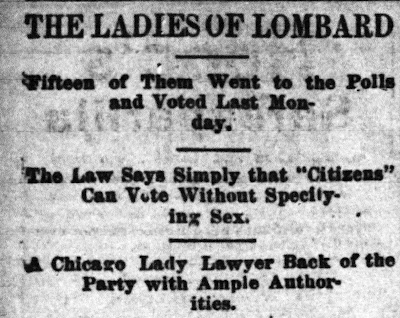 Ellen and "The Ladies of Lombard" ignited change in their society.  By fall, women were granted the right to vote in school elections. 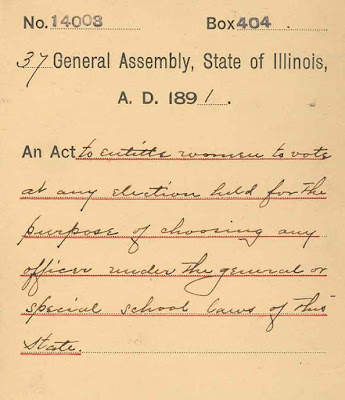 Additional but still limited voting rights were enacted in 1913.

By 1919, Legislators were set to vote on the 19th Amendment.  They had hoped to be the first state to radify the amendment (a heartening decision) and joined with Wisconsin and Michigan in approving the amendment on June 10, 1919.  One slight problem with the language of the bill meant they had to repeat the vote a week later.

Ellen A. Martin has been celebrated in Illinois for her courageous actions.  I found two times that she was honored in Congress.  In 2001 and again in 2019,  Senator Dick Durbin recounted the story of Ellen's tenacity and honored the contributions of women.  In 2001, he wrote:

Ellen Martin refused to be held down by the social and political mores of the day.  She had the courage to challenge and conquer the barriers that attempted to restrict her.  And for her efforts, she won a small but important victory.

In Lombard, Illinois,  April 6 is celebrated as Ellen Martin Day!

Thanks Barb for sharing this wonderful story with us!

Posted by Michele McLaughlin at 5:05 AM