The first is is a crazy quilt housed at the American Folk Museum.  You can read about it here.

The second one was a signature fund raising quilt, this one is part of the collection at the Museum of Fine Arts in Boston.  This one includes Susan B. Anthony's name.  Read here. 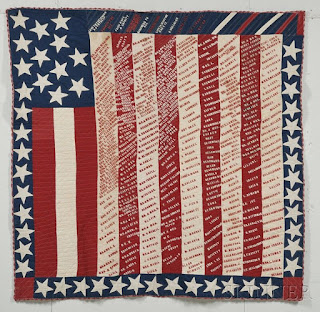 But while doing research, I found that a number of suffragists made quilts for a variety of reason.  Frequently the quilts were made as fundraisers or as gifts or donations.  I thought it would be fun to share some of the research I've found--even if I don't have a photograph.  I call them "Wish Quilts" as in "I wish we could see the actual quilts."

Somewhere near Smith Center, Kansas, a "Sunflower Supper" was given in the late 19th century as a suffrage fundraiser.  The program consisted of songs, recitations, tableaux and sale of a suffrage  quilt.  The newspaper doesn't elaborate on the pattern of the quilt but the evening was considered a financial success.  However, 29 miles away, in Phillipsburg, Kansas, a report of a similar (if not same) event was reported.

"Our district equal suffrage association president writes from Cedarville her home, that their club gave a sunflower supper on May 4th that was very successful socially and financially, enabling the club to redeem their $25 pledge to the state fund.  A splendid program was carried out, consisting of recitation, songs, and a tableaux.  They also drew numbers for a sunflower or suffrage quilt.  There is a good suggestion in this for other clubs."

Although we don't know the quilt pattern they are describing, this is an early sunflower pattern published in the Ladies Art Company catalog: 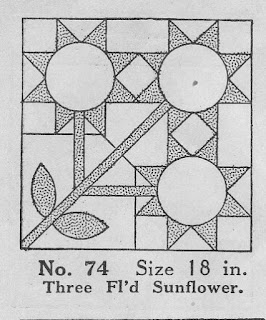 I occasionally find quilts of this pattern at online auctions: 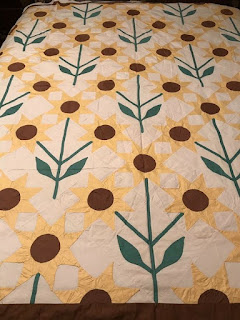 While researching the Kansas Equal Suffrage Association, I stumbled upon another quilt which was owned by Lucy Brown Johnston and her husband William Agnew Johnston.  They were both involved in the suffrage cause.  Take a look at the crazy quilt they owned here.  It wasn't a suffrage quilt but it is sure nice to study!

Posted by Michele McLaughlin at 5:37 AM