It's About the Children...

One of the most profound moments in our program, By the Chimney No More, is when we talk about the welfare of children in the late 19th century.  During the Victorian era, women were considered to be morally superior over men and their realm was home and family.  For most suffrage and temperance groups the protection of children was preeminent in their cause. The impact on suffragists regarding children was discussed frequently in the early 20th century.  In Colorado where women had been granted the vote as early as 1893, Judge Lindsey of the Denver Juvenile Court wrote in the early 20th century:

“We have in Colorado, the most advanced laws of any state in the Union for the care and protection of the home and the children.  These laws, in my opinion, would not exist at this time without the powerful influence of woman suffrage.” 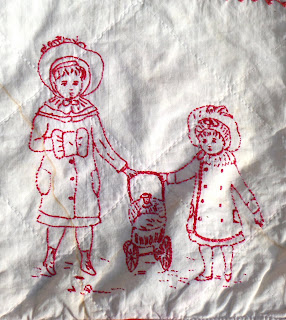 In 1917,  Annie G. Porritt published a study in a book entitled Laws Affecting Women and Children in the Suffrage and Non-Suffrage States.  You can actually read it via Google Books.  She had some pretty interesting insights like this chart: 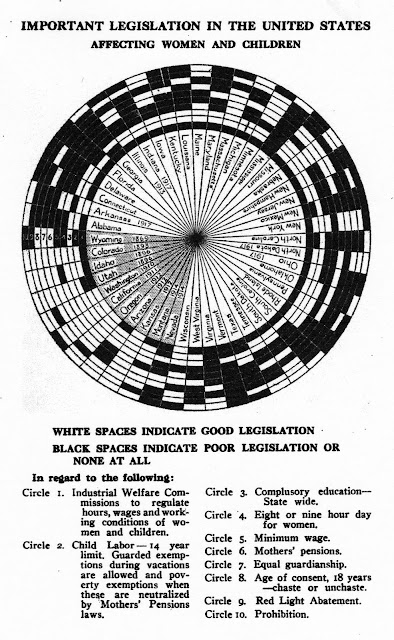 Please note that the white (good) legislation generally occurred in western states where women already had the right to vote.

In 1905, Florence Kelley wrote a stirring piece on child labor:

No other portion of the wage earning class increased so rapidly from decade to decade as the young girls from fourteen to twenty years. Men increase, women increase, youth increase, boys increase in the ranks of the breadwinners; but no contingent so doubles from census period to census period (both by percent and by count of heads), as does the contingent of girls between twelve and twenty years of age. They are in commerce, in offices, in manufacturing.
Tonight while we sleep, several thousand little girls will be working in textile mills, all the night through, in the deafening noise of the spindles and the looms spinning and weaving cotton and wool, silks and ribbons for us to buy. 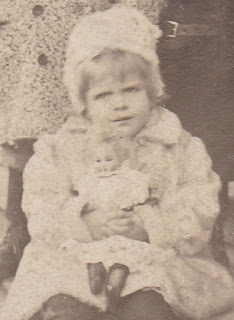 My Nana about the time of the study.

Although some gains were made to regulate child labor during the Progressive Era, it wasn't until 1938 and Fair Labor Standards Act that real mandates ensured the safety of children. 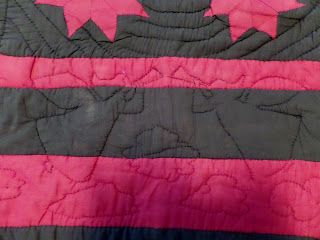 Turn of the century crib quilt from my collection.  Note the angels quilted on the piece.

Women's empowerment and the status of children have long been studied as being co-related.  In more recent times, a 2011 study found that children's mortality declined by 8-15% (that's about 20,000 kids a year) after women got the vote.  The reason appears to be that immediately after women's suffrage was passed, there was legislation was enacted that improved public health care and benefited children.  The bill was called the Sheppard-Towner Act of 1921.  The study I read cited this:

Richard Meckel (1990) observes that “fear of being punished at the polls by American women, not conviction of the bill’s necessity, seems to have motivated Congress to vote for it. As one senator admitted to a reporter from the Ladies Home Journal, ‘if the members of Congress could have voted on the measure in their cloak rooms, it would have been killed as emphatically as it was finally passed out in the open’” (Selden 1922). Growth in public health spending, in turn, was critical for scaling-up intensive door-to-door hygiene campaigns. Child mortality declined by 8-15% with the enactment of suffrage laws, and causes of death that responded were exclusively infectious killers of children sensitive to hygienic conditions (diarrheal diseases, diphtheria, and meningitis).

You can read the study here.

Lastly, I want to point out that many of the themes I'm discussing in suffrage continue to play an important role in the voting patterns of women.  More and more political pundits are pointing out that women voters are assessing the treatment of children, examples of politicians, and the lack of protection of children as they decide about their vote.  Women will play a key role in the upcoming elections. 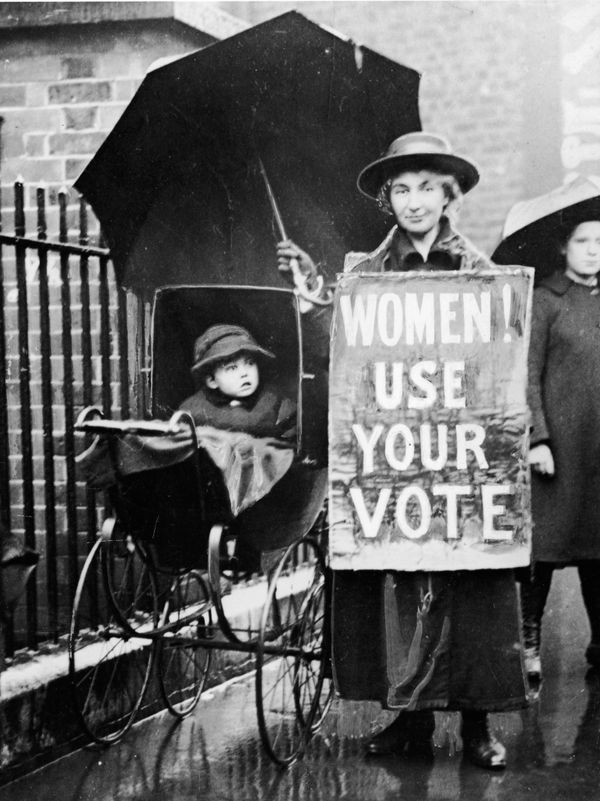 Posted by Michele McLaughlin at 7:02 AM