Kewpies from Heaven for you and me... 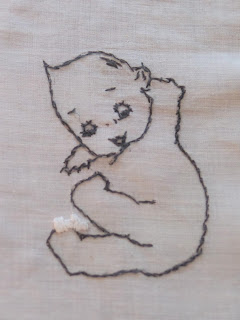 Kewpie Dolls were the rage in the early 20th century.  The characters originated in Rosie O'Neill's cartoons but shortly afterwards, she had them made into dolls.  People were crazy for the dolls and I've found a few embroidery patterns.  The embroidered kewpies on this post came from a sheer (batiste) coverlet in my collection.

O'Neill was also a big supporter of women's right and suffrage.  Suffrage cards and posters featured the little figures: 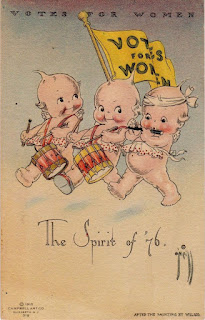 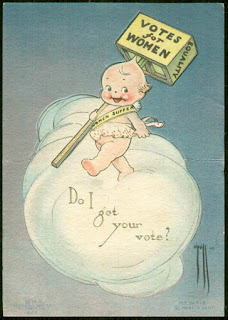 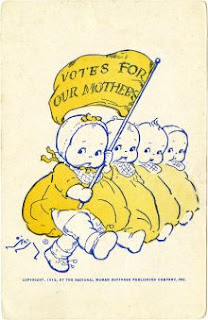 In the 1915 New York suffrage parade, O'Neill sponsored a "Children's Van" decorated with the dolls.  But what I would have liked to have seen was a rally in Nashville, held in November of 1914.

The publicity stunt was a feature of the NAWSA convention held there.  Katherine Stinson, a well known female aviator, flew over a crowd and released a number of 4 inch kewpie dolls (one source said with parachutes attached) that featured "Votes for Women" sashes. 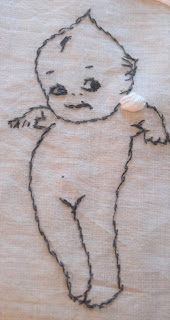 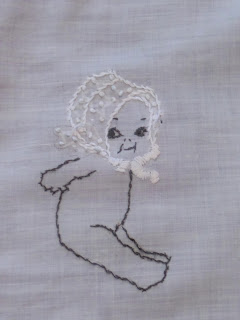 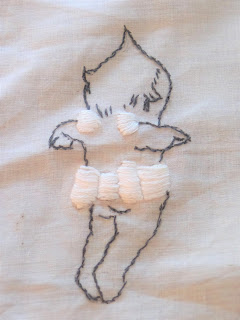 I only have a few sources that cited this event and couldn't find any photographs of it.  But I surely would have liked to have seen it!  This concludes our doll week feature.

Stay safe and have a great day!

PS--If you notice font differences in my posts these past few weeks, it's because blogger is messed up!

Posted by Michele McLaughlin at 5:58 AM