Suffrage Jewelry and a Giveaway 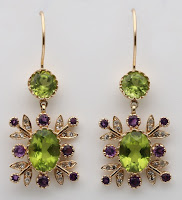 In our program, Money, Myth, and Madder:  Women and Quilting During the Civil War, we often discuss the myth of the underground Railroad Quilt Code (yes, it's a myth).  Myths permeate other craft areas as well.  Case in point:  Suffrage Jewelry.  I've seen lots of so called examples at online auction websites.

This particular myth is actually grounded in some reality.  In England, Mappin and Webb jewelers capitalized on the suffrage movement and offered a Christmas catalog of "Suffragette Jewelry" predominately with stones in the colors of the Women's Social and Political Union: purple, green, and white.  The catalog was offered in 1908 or 1909 (depending on the source).  No actual known catalog has been found.

In the world of antiques we need proof or provenance.  Deanna at Inherited Values has written a great article about about the myths of this kind of jewelry.  She challenges the "secret code" some speculate was in the pieces.  Read the article here.

In the United States I read that in the same era, some jewelers also offered suffrage jewelry but it is difficult to find images of the actual pieces my sources cited.  Then I found this in an archived magazine:

Sorry the image is so unclear!

A suffrage bazaar advertised in Chicago indicated suffrage jewelry for sale but it is unlikely that it was expensive jewelry (think craft fairs):

The National Woman's Party--like their British counterpart the WSPU--designed special jewelry for participants in the movement.  For the Silent Sentinels who picketed there was this piece: 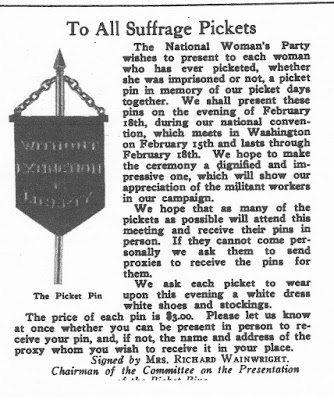 In the U.K. there was a special pin for women who had endured forcible feedings.  It was recently featured in an episode of Call the Midwives.

In the United States, those that had been incarcerated received a special pin designed by Alice Paul: 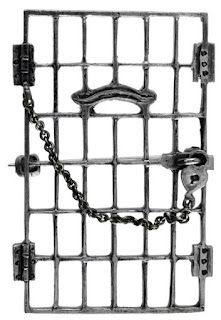 Copies of the prison pin are available on Etsy.  I bought one for a miniquilt I made to celebrate the Pennsylvania Silent Sentinels that were imprisoned: 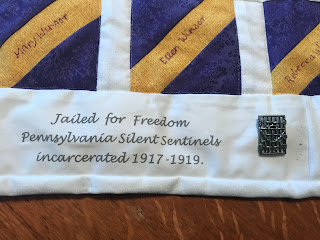 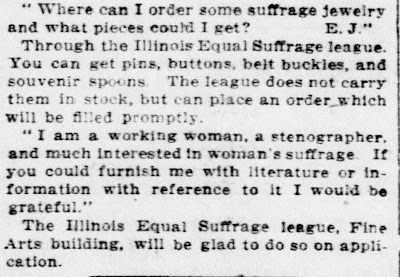 Most suffrage pieces were buttons and ribbons like these: 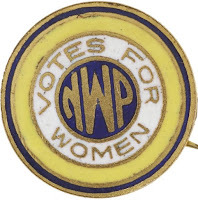 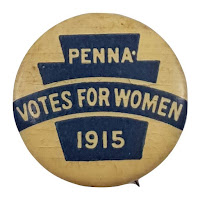 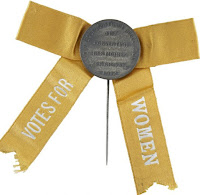 One of the most important aspects of jewelry and suffrage is unrelated to retail.  Women frequently donated their jewelry to help support the suffrage cause. 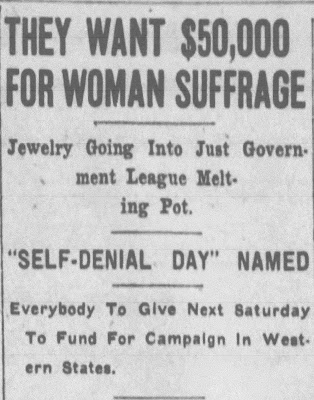 Today I am donating some bling to you!  Our giveaway today is two charm packs of Michael Miller's Fairy Frost fabric.  There is a nice sheen to the fabric without heavy glitter. 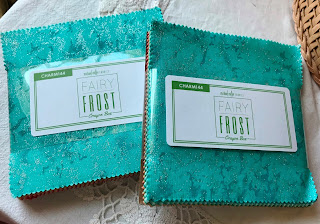 Leave a comment to compete in the random drawing which will picked on Thursday.  Have a great day!
Posted by Michele McLaughlin at 5:09 AM