Last week I told you about the Seneca Falls Convention of 1848.  Seventy-two years passed before the 19th Amendment was signed into law.  Only one woman who attended the convention lived to see the passing of the law.  Her name was Charlotte Woodward Pierce. 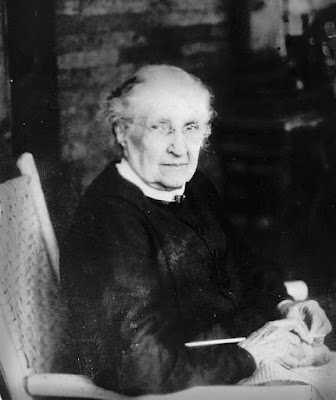 Charlotte with her knitting.

Charlotte was 90 years old when in 1920.  She was the only a teenager when she attended the convention and signed the Declaration of Sentiments.  At fifteen, she was working as a school teacher and then worked as a seamstress making leather gloves (yes before sewing machines).  One source credited the fact that while she was a seamstress, she began to think about the inequity of her status as a woman because the only salary she earned was her room and board.  She told one reporter:  "I was only a girl of eighteen when the Seneca Falls Convention was held--and I am proud I too am a native of New York state."  After her marriage, she and her husband settled in Philadelphia where she lived the rest of her life.

The sad part is that Charlotte was too ill to cast a vote in 1920.  She passed away in 1921 and it is not thought that she was ever well enough to exercise her true right as a citizen at the ballot box.

You can read more about Charlotte here.

Have a wonderful day!
Posted by Michele McLaughlin at 4:03 AM