The Ladies Art Company was established in the latter part of the 19th century.  This company is credited for the nomenclature of many early quilt patterns.  The published catalogs and ladies could send away for the patterns listed.  We still use many of the names the company (or LAC) used to denote patterns.  In 1990, this company was discussed in Uncoverings, a yearly publication by the American Quilt Study Group.  You can order the book here. I have a number of the catalogs from the early 20th century in my collection: 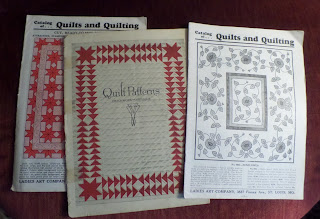 "The Snail's Trail" pattern isn't the typical "Snail Trail" you might know.  Here is a table runner I made for my son and daughter-in-law a few years ago--using the pattern that most frequently comes to mind: 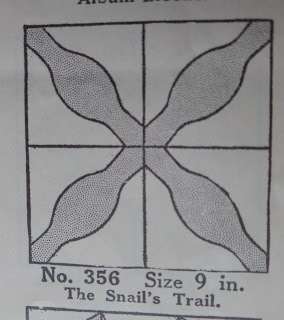 I know you are going to ask me if this appliqued or pieced.  I have two quilts in this pattern and both are pieced.  This may have been a somewhat popular quilt in our area.  I have seen a few come up for auction.  My older quilt appears to be from the latter part of the 1800s or early 1900s: 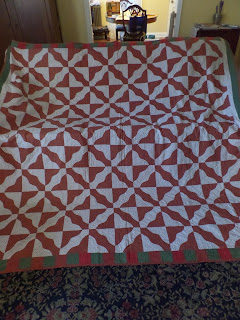 I love the border on this piece: 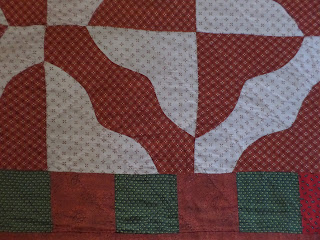 The second one I own is actually a tied comfort and I always show this piece in my program about embroidered quilts.   I think this one is from the early 20th century.  I fell in love with it because for whatever reason, it reminds me of an old friend's Arts and Crafts style home. 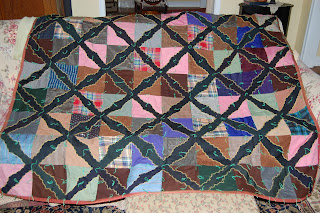 I thought about this quilt pattern today because I am not seeing snail/slug activity in my garden these days.  Snails and slugs thrive in moist conditions and it's been an unusually dry April in Eastern Pennsylvania.  This is particularly problematic north of us in the Poconos Mountains where a terrible forest fire has consumed over 8,000 acres of land and continues to rage (you can read about it here).  We continue to pray for our friends and family in the north and hope we get the much needed rain that has been predicted for Thursday and Friday.

Posted by Michele McLaughlin at 6:49 AM

Email ThisBlogThis!Share to TwitterShare to FacebookShare to Pinterest
Labels: The Snail's Trails Quilts