Despite the fact that is the first full day of spring, we have a nice snow storm going on outside.  Scout enjoys playing "snowball": 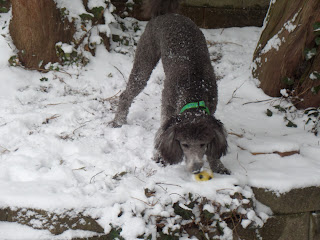 My Nana Betty had hot flashes from the time she was a child until she was a senior.  As an artist, she said the one color she disliked was red--because to her it was a "hot color".  Despite Nana's considerable influence on me, I love the color red. 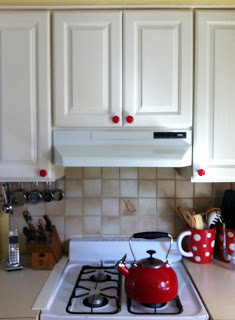 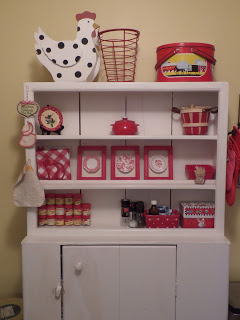 Because of my passion for red, the family's Hall pottery was sent my way. 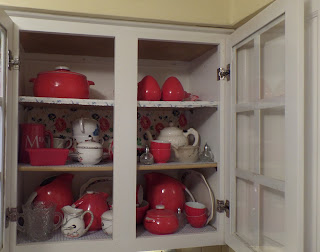 Because red is a "hot" color and it is snowing out, I thought I would post some redwork pieces.  None appear on quilts.  They are linens like splashers and shams.  The motifs are appealing to me. 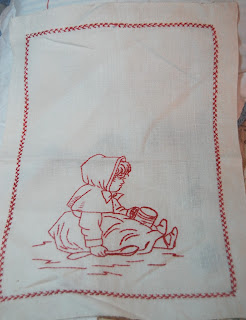 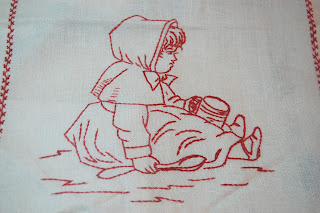 Above baby piece, not constructed as a bib but seems to be a piece of linen that could be used as one.
Below:  Reminiscent of Kingsley's Water Babies. 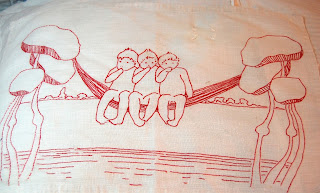 Below:  I think this might be a sham.  The quote is from Longfellow's poem, "The Song of Hiawatha."  Hiawatha motifs were still popular in the early 20th century despite the fact that the poem was published in 1855.  I suspect it was a poem that children often had to memorize. 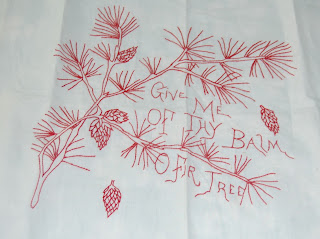 For those of you in the Northeast during this snowy day:  Stay safe and warm!
Posted by Michele McLaughlin at 8:11 AM

Email ThisBlogThis!Share to TwitterShare to FacebookShare to Pinterest
Labels: Embroidery