Are you in one of the states that has coronavirus?  We now have cases in Pennsylvania.  An engineer that works for my husband's company has it as well; he lives in Italy but reports say he is doing well.  How are you faring?

I am reminded of the 1918 Spanish Influenza Pandemic.  The first time I learned about this particular plague was when I was 12 or so and read Pale Horse, Pale Rider by Katherine Anne Porter.  The novel made me uneasy and I remember I had a lot of questions for my father;  it surprised me to learn that unlike other flu viruses, this one impacted 20-40 year old people more than children or seniors.  Similar to the Spanish Influenza,  children seem to be more immune to the coronavirus than other viruses (at least as I write this).

The women of courage during the pandemic of 1918 were of course nurses. 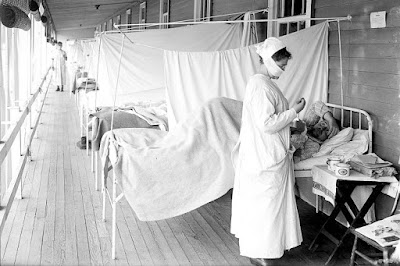 The pandemic was so bad that often there wasn't room in the hospitals.  This actually happened to Katherine Anne Porter--the novel is based on her own experiences and loss--until her editor somehow managed to pull strings to get her a place.  Still she ended up being in a hallway of the hospital for care for 9 days until a bed was available.

Nurses not only cared for the ill in the hospital setting but also did community nursing for folks who could not get a spot. 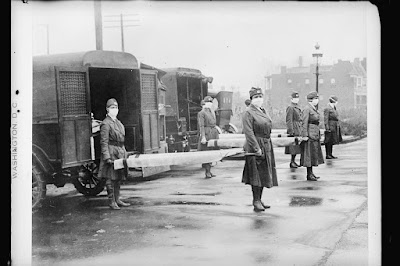 Nurses also cared for the military overseas and here at training camps such as Camp Crane here in Allentown.  I've read that 272 nurses died overseas from the influenza.  Another article I read said about 1 in 95 nurses died from the flu; 1 out of 148 medical officers died of the flu most likely because they did not provide the hands on care like nurses.

I've found some articles that cite that women were the true heroes during this pandemic and that their work contributed to the passing of the 19th Amendment two years later.  I just want to say that women had also proven themselves (again) during World War 1 and I will be devoting a whole week to women's war relief efforts in April.

Here are some articles you might find interesting:
"How the 1918 Pandemic Helped Advance Women's Rights"

"Nursing During the Spanish Influenza Epidemic of 1918"

"Did We Forget to Memorialize Spanish Flu Because Women Were the Heroes?"

"How the 1918 Spanish Flu Pandemic Changed the Nursing
Profession." 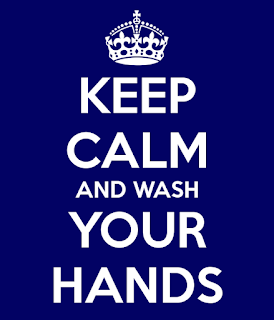 Posted by Michele McLaughlin at 12:45 PM

Email ThisBlogThis!Share to TwitterShare to FacebookShare to Pinterest
Labels: Women of Courage 1